The average sale price in Summit County was the highest in history for the month of March.  Averaging over $600,000, March sales capped off three months that brought the highest 1st Quarter average prices in history as well.
Before you pop the champagne corks, however, consider that the number sold, 319, was only about 1.5% more than 2015 and still lags way behind 2006 when the most properties in history closed in the 1st Quarter, 543.
Those of us who have been here long enough know that when sales volume levels out or declines but prices continue to climb, trouble usually follows.  This exact thing has happened at least twice in Summit County. 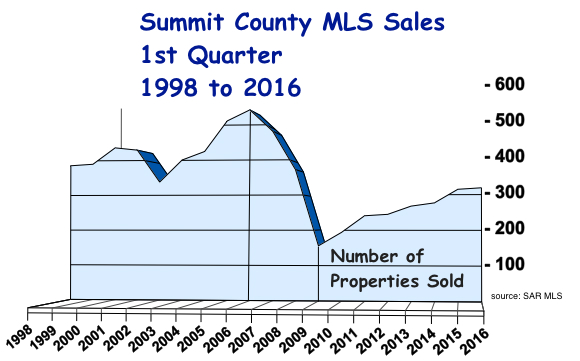 September 11, 2001 began three years of declining sales and flat prices.  The latest example was in 2008 when the average sale price peaked out at about $569,000 while the number sold that year dropped by over 20%.  That started a four year decline in sales and prices in our market.
Part of the flat sales performance so far this year is due to the severe lack of inventory that continues into the second year.  At the end of the 1st Quarter there were still only 800 properties for sale,  just over twice as many as had sold to that point, and nearly 300 of those were vacant land.
The shortage will likely continue through the year as owners who would normally sell after seven or eight years see prices just now returning to where they bought.  That’s about 5200 buyers from 2007, 2008 and 2009 that should be selling after the typical hold time here in Summit County.
Even though properly priced new listings are selling in a week or so, the number of buyers is below average.  Prospective buyers receive automatic notification of new listings and act quickly because they have been waiting for something to buy.  Many have missed the last property to dribble onto the market and don’t make that mistake twice.
It is difficult to determine if the flat sales are a result of lack of inventory or lack of buyers or both.  But coupled with 1st Quarter prices running nearly five percent above the previous highest in history there is cause for concern.  If history is any indication, we could be heading into a stagnant period.
Second homes are completely discretionary purchases.  No one absolutely has to buy a second home, or to sell one at this point, either.  Distressed sellers are a thing of the past having already left the market one way or another years ago. 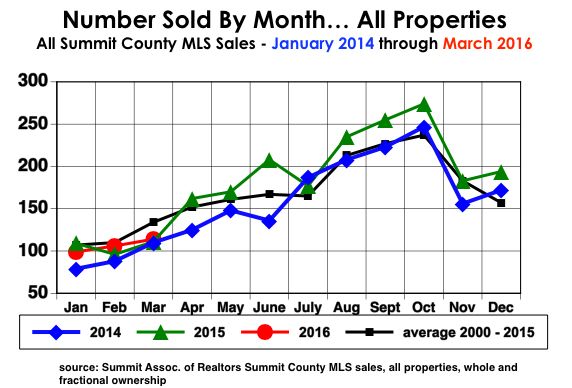 Second home buyers need to feel secure and confident in their financial circumstances.  It doesn’t take very much uncertainty to make them freeze up and thanks to the current disaster unfolding in domestic politics and continued attacks on soft targets overseas and at home, there is plenty of uncertainty to go around.
It may be wise for owners who are waiting for better prices before selling to act sooner than later.  This may be as good as we’ll see for a while.
Usually election years don’t have as much impact on our market as this one seems to be having already.  And the way it’s going, this could be the lull before a real storm in the middle of our busiest season.
We normally sell more than half the properties that close in the second half of the year peaking in August, September and October.  Last year those months brought sales numbers well above average for the first time in several years.
This year is on track to just about equal last year, but not much more.  And while average prices usually decline through the year due to a disproportionate number of high dollar sales in the 1st Quarter, the year-end average should be a little ahead of 2015.
So while prices look great and will probably at least equal last year’s, 1st Quarter sales may be a straw in the wind.  By this time next year, there could be a couple of thousand long-time owners stuck in a market with more properties than buyers and wishing they had sold this year.
Don’t be that guy. 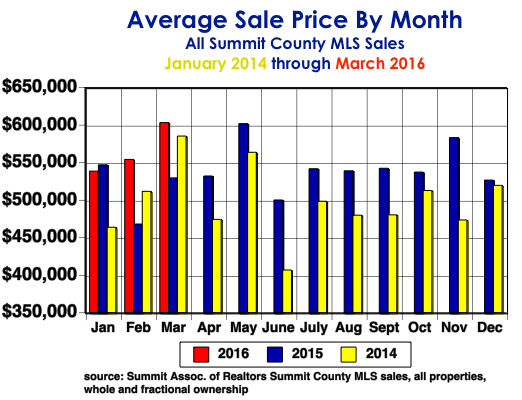 For 15 years starting in about 1986 until 2001 this market went nowhere but up.  Despite two depressed periods, average prices still increased by over 400 percent from 1985 through last year.   Since the 2008 peak they have decreased by about five percent through last year.
This year prices will probably recover to those of the peak in most neighborhoods.  However it is clear that since 2001 we are in a new era and it will be more cyclical.
Over the long term, this market still has a lot of upside due to being largely built out, relatively affordable for a resort area, and discretionary incomes that continue to rise in Colorado.  The short term is less certain.
Decide how long you plan to be involved here and make your decision accordingly.