Million dollar homes attract the attention of the media and popular culture.  Everyone wants to know who’s buying what and for how much.
So far, Summit County’s high dollar owners are not high profile; Internet entrepreneurs, lawyers, oil people and the like.  But it’s clear that the well to do are arriving in increasing numbers and that Breckenridge and Summit County have become the third alternative behind Aspen and Vail. 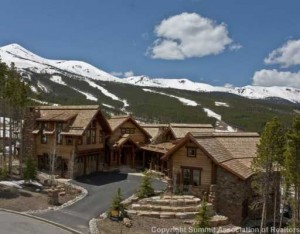 The most expensive home ever sold in Summit County…
$8.3 million in 2009

A  Summit County residential property first sold for a million or more in 1996 when 5 of them sold.  The best year for expensive property was eleven years later in 2007 when 199 of them sold.
Last year 148 residences and lots sold in Summit County for over $1 million, 10 more than in 2013.  122 were in Breckenridge including the top 13 most expensive homes in Summit County.  Silverthorne was second with 18 and everywhere else combined had a total of 9.
Million-dollar sales declined less than most other price ranges during the downturn beginning in 2009.  The lowest number since then was 2011 when only 105 of them closed.  And even amidst the economic melt down of 2009 one home sold for $8.3 million, probably the highest price ever.
The most expensive home sold last year was a 5100 square foot home in Shock Hill at Breckenridge for $3.6 million.
2014 was the 4th best year for expensive homes.   The high-end market continues to grow.