The Summit County real estate market is hot, right?  Headlines and young eager brokers tell you it’s HOT!  New listings are selling in a day and multiple offers are common.  Hot, right?  Well, the hotness is not what it seems.
A woefully meager inventory and an average number of buyers have created an artificially tight market that could suddenly slow down if more sellers appear or fewer buyers are pouncing on the next listing… or both. 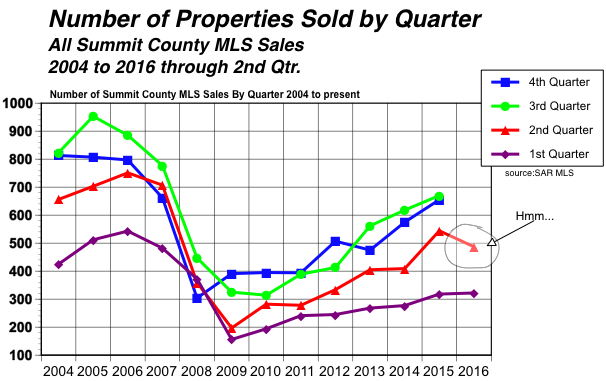 Uncertainty always has an effect on the Summit County real estate market.  Between a nasty election, Brexit-related concerns and 3000 point swings in the stock market, we’ve got uncertainty in spades and it’s already having an effect.
Through the first half of 2016, there were 6 percent fewer properties sold than in the first half of 2015.  811 sales closed this year versus 862 in 2015.
There were about 10 percent fewer properties sold in the second Quarter than last year.  This is not good.
The number sold to date is right at the 15 year average for the second year in a row after finally recovering from the Wall Street melt-down of 2008.  But this is still well short of the high point reached in 2006 when nearly 1300 properties sold in the first two Quarters and nearly 3000 sold in the entire year.  It beats 2009, however, when fewer than 400 sales occurred in the first half and about 1000 total sales closed all year.
Sales in the first half of the year have averaged about 40% of total sales over the last 25 years so we can reasonably expect about 2000 sales this year if that proportion holds.  But there won’t be another ten or fifteen percent increase this year.  There may be no increase.
Even if 1200 more properties close by year-end, the July 1 supply of about 1000 properties is only slightly behind demand.  For the past two years, supply has been a lot lower than that and has resulted in very quick sales of new listings. 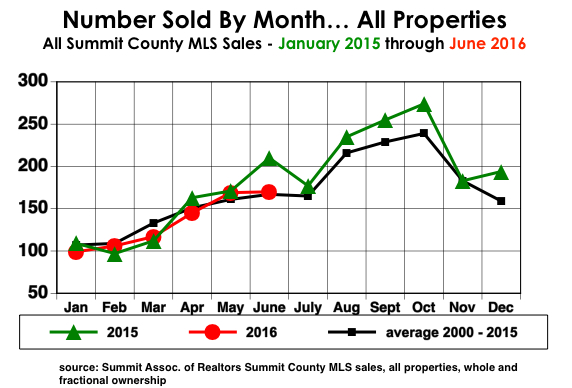 Inventory in specific price ranges, types of property and neighborhoods has been low to non-existent since mid-2014.  If you own a town home, a condominium in a popular complex, or a single family home under $600,000 the world has been your oyster for about two years.  These types of real estate have especially been in solid demand but very short supply.
This could change as the summer goes on and world-wide turmoil continues.   Sellers may decide that this is the near-term price peak and finally let go of their property.  Buyers may hit the pause button while the world sorts itself out.
This market is dominated by second home buyers who have to feel financially secure enough to spend on a luxury like a vacation property.  Uncertainty dampens our market almost immediately.  No one has to buy or sell a second home.
Take away that feeling of security and the result is more inventory, fewer buyers and often, price stagnation. 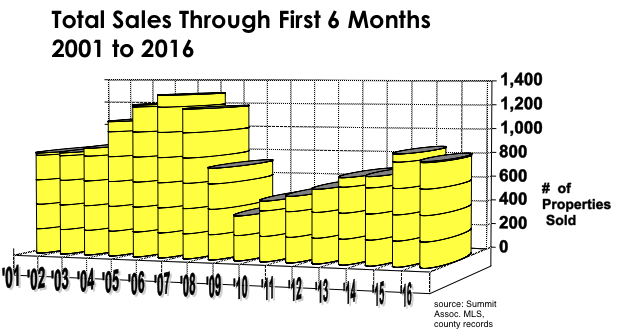 Prices are in the vicinity of the historic high in Summit County having just climbed back to that level last year.  Some neighborhoods are slightly above the historic high, others are slightly below, but price stagnation at this level isn’t the end of the world.  This isn’t 2009 all over again.
Sellers who decide to wait a little longer probably won’t see higher prices this year or maybe even next.  They will see a lot more competition as the inventory increases.
Buyers who decide to wait for the “next crash” will probably pay about the same in a year or so as they would today, meanwhile missing out on two years of enjoyment.
At least the election uncertainty will be behind us by mid-November.  The economic uncertainty will probably take longer to resolve itself and the effects on our second home market will continue until it does.
But there won’t be any catastrophic change in market conditions, up or down, for a while.  The pause button has probably been pushed.