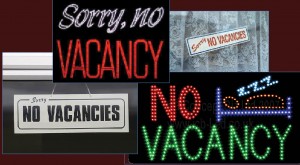 There’s a housing crisis in Summit County.  Never before have so many renters sought after so few homes.  At the end of December there were a total of 3 residences for rent in the Summit Daily News and the seasonal migration of workers to Summit County had not peaked.
Unfortunate lodging seekers are being caught up in Craig’s List scams left and right.  Every Realtor in Summit County is getting calls asking if their listings are for rent or checking to see if the Craig’s List posting is for real (it usually isn’t).
In December Vail Resorts narrowly avoided an employee mutiny.  They announced that, due to the lack of rental space, bunk beds would be installed in employee housing.  The battle isn’t over, there still may be a strike.
Historically, the overflow of renters moves to Leadville, Fairplay and Kremmling. Rents are much lower, but the 80-mile round trip drive soaks up the savings.  This year those small towns are packed as well.
Two bedroom units in below average condition and location are renting for $1400 to $1600 per month.  Nice units go for well over $2000 in Frisco and Breckenridge.  Homes and duplexes are even more expensive.
Sale prices for these units reflect this shortage.  A year ago you could have bought a Dillon Valley East two bedroom for under $140,000.  Today it will cost $185,000.  And at these prices, renting still doesn’t do more than break-even except for cash buyers.  So a lot of these units are being bought for cash.  That takes affordable housing ownership away from locals who can’t pay cash and pushes prices higher than they can qualify for.
The theory that second homes being rented to vacationers causes the rental shortage is hogwash.  More than half the second homes in Summit County are never rented and of those that are many are rented long-term to local residents.
Several HOA’s have limited rentals to 30 days or more.  With no short-term allowed, more long term rentals have been added to the pool.
The main cause of the housing shortage is population increase coupled with lack of vacant land.  Don’t expect either of these factors to change much in the future. Every resort area is facing this problem.
Tourism is now, by many accounts, the largest industry on earth; possibly bigger than energy, manufacturing, and tech combined.  It’s not going away.
So… that’s why I own rental property.